The trickiest part of all supplements is that there is little regulation to determine their efficacy. All statements that claim a supplement can treat, cure, or prevent any kind of disease must be verified by the VMD. Once these claims are verified through a long and expensive process, the supplement is subsequently considered a drug and strictly regulated by the VMD. What supplements can claim, however, is that the ingredients of those supplements have been shown to have beneficial properties. Given that many of joint supplements contain a number of the same ingredients – glucosamine, chondroitin, hyaluronic acid, MSM – this further complicates the task of choosing one! By examining the latest research and recommendations from the scientific community, we can develop a more thorough understanding of why the mentioned ingredients and others are used in joint supplements, what they are believed to do for joint health, and their efficacy. This knowledge will then better allow us to better determine which joint products are the best for our horses.

But first - why are joint supplements so commonly used?

Joint Disorders are the most common health problem in horses

In 2018 Cavalor® and Horse & Hound conducted a survey concerning joint problems in horses amongst the owners of a total of 1,339 horses in the UK, Belgium and the Netherlands

Sooner or later 67% of horses will encounter joint problems and 1/3 of owners have to retire their horses earlier than planned as a result of this. This was demonstrated by an international survey of horse owners in 2018. Joint problems can even lead to lameness. To strengthen your horse’s tendons and joints and reduce the risk of inflammation, appropriate nutrition is vital in order to keep your horse healthy and in good condition for longer.

36% of horses showed symptoms before the age of 8.

69% of horses required 5 treatments and 21% required 10 or more treatments. 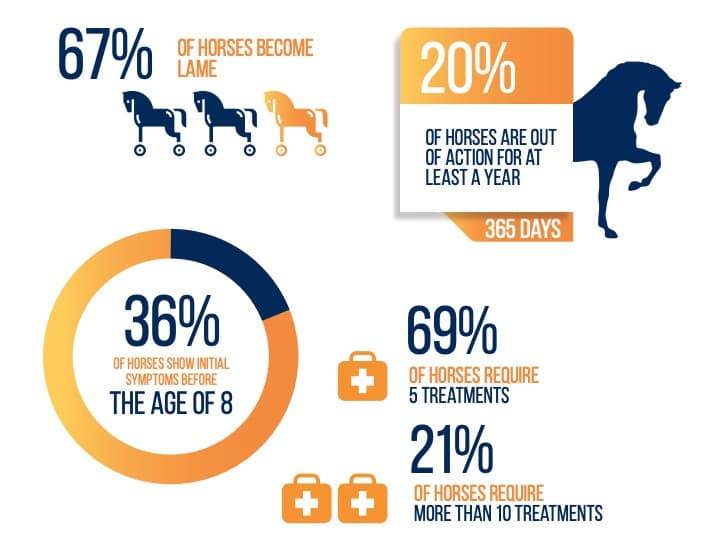 The main problems are :

So let's take a quick look at some of the most commonly found components and the evidence for their use.

Glucosamine is one of the most common active ingredients in equine joint supplements. This compound is considered an amino saccharide, meaning it has elements of both proteins and sugars. Glucosamine is believed to have joint-protection properties since it is a known precursor to both hyaluronic acid and glycosaminoglycans. Hyaluronic acid is a component of synovial fluid – the liquid that lubricates the joints – while glycosaminoglycans are one of the major building blocks found in cartilage – the flexible “cap” found covering bones at various joints, such as the stifle or the pastern. With this in mind, it is reasonable to think that, by feeding glucosamine, one can assist the body’s repair and rebuilding efforts to help stave off the effects of arthritis.

Unfortunately, that is not the case.

Chondroitin is a protein that is responsible for the compressive resistance found in the joint and is important for maintaining joint integrity, particularly for horses that are in consistent, rigorous work. Chondroitin is most commonly found in the form of chondroitin sulfate. In humans, chondroitin sulfate is shown to help decrease cartilage loss, which can help preserve long-term joint function in active adults (Gallagher, 2015). The large issue with chondroitin is that there is a huge amount of variation in the source, amount, and purity found within supplements (Martel-Pelletier, 2015). While majority of chondroitin-containing supplements have anti-inflammatory effects, sometimes these effects are marginal. Even worse, sometimes these supplements are in fact pro-inflammatory, possibly due to impurities in the chondroitin source used. This information indicates the horse owner should try to use a supplement manufacturer they trust to ensure that only pure chondroitin sulfate from high quality sources are used.

Hyaluronic acid is a protein found throughout the body, including the skin, brain and connective tissues. It is also one of the primary components found within synovial fluid, which is the fluid that is found within the joints and responsible for lubricating these joints for pain-free locomotion. This compound is widely found to be effective in helping young horses recover from OCD in both surgical and non-surgical cases when given orally (Bergin, 2006; Carmona, 2009). Oral hyaluronic acid is also well known to help reduce synovial effusion. Synovial effusion is an inflammatory response that causes joint swelling and, subsequently, a decrease in mobility and sometimes pain. In older horses, oral hyaluronic acid has been shown to have anti-inflammatory benefits and help improve locomotion (Percope de Andrade, 2013).

Methylsulfonylmethane, or more commonly referred to as MSM, is an easily absorbable form of sulfur. Sulfur is a primary building block of numerous structures, including joints, tendons, and ligaments. While MSM is not as well-researched in horses as some of the other nutraceuticals mentioned, there have been promising studies that look into the effect MSM has on joint health in other species. One study examined mice fed MSM at various levels over several months (Ezaki, 2013). After 13 weeks, the mice fed the MSM were observed to have a significant reduction of joint degeneration. In another study, MSM was observed to have an analgesic effect in people with known arthritic changes (Nakazone, 2011). This information strongly supports the use of MSM in horses with some degree of joint degeneration.

How do you recognise the first signs of joint problems? Your horse will avoid making movements that cause pain. Their legs will also be hot around the joint and sometimes there may be an accumulation of fluid resulting in swelling of the leg.

Medical science has come a long way in terms of the treatment of joint problems – including research into surgical and medical tissue strengthening techniques. Stem cell therapy to treat horses suffering from osteoarthritis was also given the green light in Europe in 2019.

Nevertheless, the likelihood of cartilage structurally repairing itself remains small. If the damage is considerable and your horse is getting that bit older the therapeutic options are soon exhausted. Prevention is always better than cure.

It is important to closely monitor your horse’s health, invest in excellent care and appropriate training schedules, and provide tendon and joint support with the right nutrition and supplements.

Do Hyaluronic Acid Injections into Joints Offer A Solution

Hyaluronic acid injections into the joint are a frequently used treatment for tendon and joint problems. Unfortunately the high concentration in active ingredients only has a temporary and very localised impact. Moreover, injections are always risky and their efficacy is also diminished with the number of injections.

There is no actual scientific proof that oral administration of hyaluronic acid has a beneficial effect either. That is why Cavalor does not focus specifically on hyaluronic acid.

How Do You Prevent Your Horse From Suffering Joint Pain?

Do you want to minimise the risk of joint problems in your horses? If so, supplement their nutrition with Cavalor® food supplements. The efficacy of these supplements is derived from the combination of ingredients, which produces an optimum effect.

You will find a very extensive range including supplements for healthy joints and tendons at your supplier, enabling you to choose a product specifically adapted to your horse’s individual requirements. F

eed as you need is something we feel very strongly about. The various information sheets indicate which individual product is best for your horse. Putting it in a nutshell:

Buy £200 worth of products with no more than 5 bags of feed and ship for free across Mainland UK.